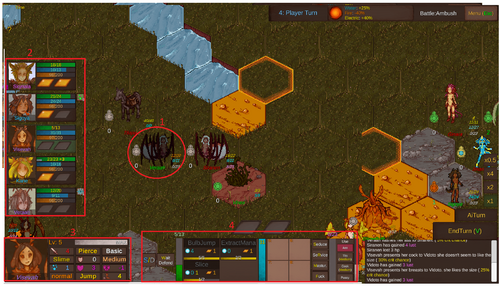 Interface: In the image to the right (combat example) you can see different infoboxes. They are sourrounded in red and numbered. They are: 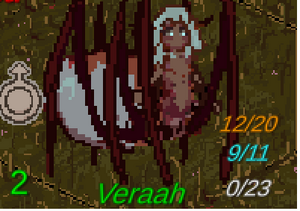 You can make your character perfom actions after you select it. The move and basic attack actions are used by default when you click an enemy or empty tile. If you want to use a different action, you first select it in the action window. You can press ESC to cancel the selected action

the action window displays HP, MP lust, and AP of your character. As well as 4 equiped items

Native tiles: there is an exception to movement costs. Travelling thorugh native tiles always costs 1 speed. Native tiles are decided by your unit's defense element (type). You are also unaffected by negative effects coming from your native tiles. Lava units do not burn in lava tiles for example

Retrieved from "https://www.portalsofphereon.com/w/index.php?title=Combat&oldid=21180"
Category:
Cookies help us deliver our services. By using our services, you agree to our use of cookies.