This article is a stub. You can help our wiki out by expanding it.
This article was updated for version 0.19.0.1

In figure 2 the stats of a plantgirl are displayed. These come from the game, from clicking on the unit's portrait. All units in the game have those stats , save creatures, which do not have maxlust, Ldmg, Lres, cock, energy, tits, and milk, because they cannot engange in sexual combat. 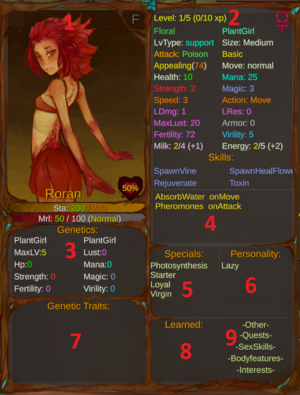 We are going to list and briefly describe each stat. Then, for those stats that need clarification, we have extra chapters in this page, or we provide links to pages that explain them further. because there are lots of stats, we group them by the windows they appear in. In figure 1, we have numbered each window.

First we comment those from figure 1. They are mostly the same

Amount of tiles you can walk with a basic moveAction. Move/Charge are affected by the terrain based on their movetype.

Native tiles: there is an exception to movement costs. Traveling through native tiles always costs 1 speed. Native tiles are decided by your unit's defense element (type)

Retrieved from "https://www.portalsofphereon.com/w/index.php?title=Stats&oldid=21350"
Categories:
Cookies help us deliver our services. By using our services, you agree to our use of cookies.